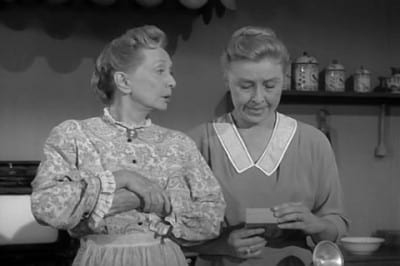 Conversation Over a Corpse

Mr. Brenner makes a down payment on a house. The house's owners, Cissie and Johanna Enright say that they don't want to sell. He threatens them with a lwsuit, but is poisoned. He collapses and the sisters discuss what they should do. Joanna wants to finish him off more poison while Cissie prefers a gun. Brenner revives and pitches on sister against the other. He gets the gun from Cissie and shoots Johanna. Soon the police arrive, Brenner clears Cissie of her sister's murder. After the police leave, Cissie finishes him off with poison so the house is all her's.