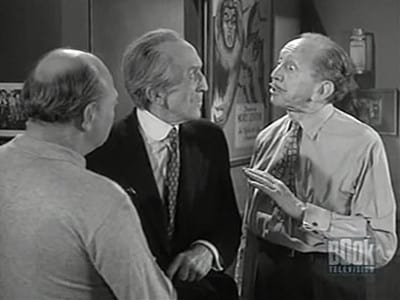 The Greatest Monster of Them All

Ernst von Croft is an has-been actor once billed as ""The Greatest Monster of Them All"". He gets a part in a low-budget vampire movie. He is proud of his performance, but is shocked when he sees the film and discovers that his voice has been redubbed. Fred Logan, the films writer, visits Ernst and offers his condolences. Later on a soundstage, however, he finds the bodies of the films producer Hal Ballew and the film's director Morty Lenton. The necks of each have been punctioned as if they were bitten by a vampire. On a catwalk high above the soundstage Ernst appears wearing his vampire cape. He falls from the catwalk and plunges to his death on the soundstage floor.