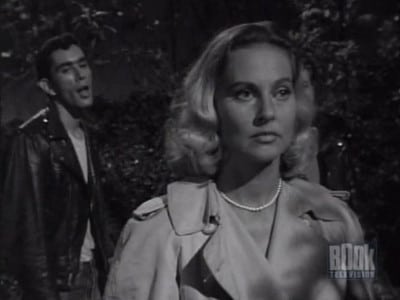 The Woman Who Wanted to Live

After killing a gas station attendent in a robbery attempt, a wounded Ray Bardon stops a girl named Lisa and demands to be driven to safety. Lisa realizing that her life is in danger agrees. As she drives, Ray falls asleep. Suddenly the car gets a flat tire. Instead of making an escape, Lisa changes the tire. Later the two stop at a hotel. Ray wonders about the girl's loyalty and asks why she didn't run and go to the police. As he talks, Lisa manages to get his gun. She reveals that the gas station attendant was her fiancee and that she didn't leave because she was waiting for an opportunity to kill Ray.