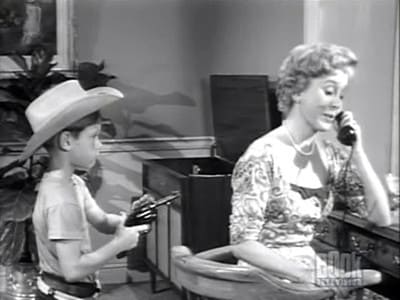 Six-year old Jackie Chester is delighted when his Uncle Rick arrives from Africa with a surprise gift. Unable to wait until rick unpacks, Jackie goes through his Uncle's bags and finds a loaded gun. Jackie thinks it is a toy, the gift his uncle promised. He goes outside to play with it. Jackie's parents and Uncle Rick discover that Jackie is on the loose with a loaded gun and set out frantically to find him. After aiming and not firing the gun at verious people, Jackie goes home and asks the maid to play with him. When she says she's too busy, Jackie aims the gun and fires it at her. Uncle Rick and the parents arrive just in time to deflect the shot.