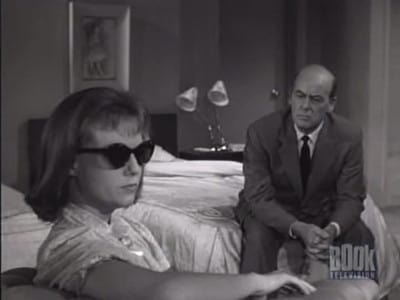 You Can't be A Little Girl All Your Life

While her husband is away, Julie Barton is attacked in her home by an intruder. She doesn't get a good look at him, but manages to fight him off. In the process of fighting she rips one of the intruder's leather gloves. Julie is terrified. When she goes to identify the intruder in a police line up she wears a pair of dark sunglasses. She identifies one of the men and her husband Tom attacks him. Unfortunately Tom breaks his own leg. Later, as Tom is preparing to go to the doctor's, Julie notices a ripped leather glove in his possession. Tom reveals that pressure from work has caused him to have a breakdown. He admits that he snapped and was the man that attacked her. Julie goes to the police and tells them they got the wrong man.