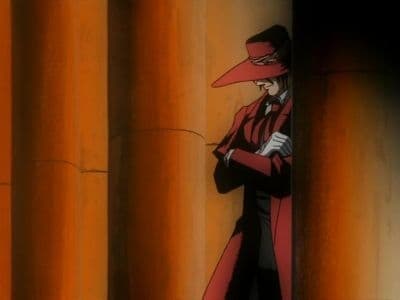 With the freak problems getting much worse, the Royal Knights arrange a meeting at Westminster with Integra to discuss the matter. In addition, the Queen will be meeting with them so they can conduct a ceremony with Integra. Because of the danger that the freaks may pose, the media is told that the meeting will take place at the Tower of London while in truth Integra's ritual is at the Hellsing castle. What is at the tower are Fargason and his men waiting for the freaks. However, it is they who are being waited on as Incognito and his freaks attack the tower. While waiting for the Queen, Alucard butts in and says that her queen isn't coming and heads off to fight.