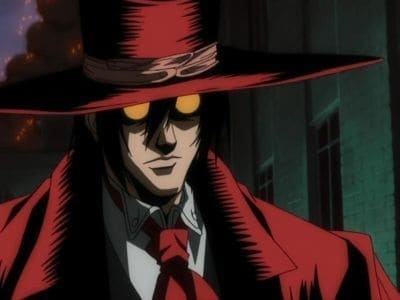 All out war breaks out at the Tower of London and Integra's meeting with her majesty is cancelled. The remaining Hellsing members are at the decoy spot of the meeting, battling ghouls of the S.A.S. from Red House Vertigo. Due to the vast coverage of the "terrorist attacks" and the required secrecy of the undead, Hellsing organization is pinned by an unknwon source in the media as the terrorist organization itself. The British military is called in to stop these "terrorists." Fargason purposely gets himself killed so he looked like a terrorist, preventing the media from investigating the London Tower destruction any further, thus keeping both the vampires and Hellsing out of the public eye (for now). Seras Victoria is finally makes it to the tower only to see Fargason get shot. After paying her final respects, she grabs her Halkonnen and rushes into the tower area. While that is happening, Alucard was making his way through the tower to meet with Incognito for one big battle.