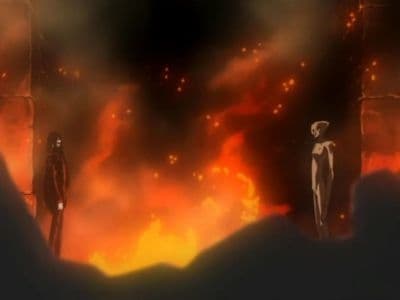 This episode opens with the fierce battle between Incognito and Lord Alucard. Eventually, as the battle ensues, Incognito manages to "destroy" Alucard with his own "bullets that store the power of the human God". Near the beginning of this battle Ceras Victoria became injured and realizes she must drink blood to heal herself, she discovers her first taste of true blood from her fallen master. Disgusted at her display of ignorance, Incognito leaves the scene to summon a demon from Hell. Incognito manages to summon Set, a snake-like creature who is the Egyptian God of Evil and of Chaos, the Desert, and Foreign Lands, from which he plans to merge his body with and develop insurmountable levels of power. As Integra Hellsing flees, her servant and closest friend, Walter, sacrifices himself so that Integra might live. Unfortunately for Walter, his sacrafice seems to be in vein as Integra is captured by Incognito and used to assist in the summoning of Set. As her blood is drained by the No