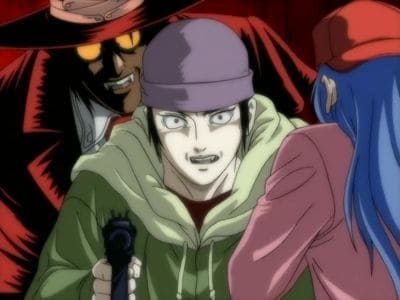 Seras' new life in the Hellsing organization is a bit tough. Having been counted as 'lost' at the Cheddar incident, she now serves for a group dedicated to the eradication of vampires. Though she seems to have trouble adjusting, many are tolerant of her, and her new life, though the tolerance only goes so far. And she'll soon have a chance to prove herself, when a new threat is discovered, in the form of Rafe and Jessica. The two lovers are having a lot of fun! Killing families, using their blood to write obscenities and blasphemy on the wall - it's all good fun. That is, until their actions catch the eye of Hellsing, and particularly Arucard, who has no tolerance for the 'low-class' vampires. Seras' chance to prove herself becomes apparent when she's ordered to shoot Jessica, though she hesitates - Jessica's only a young girl. Would killing her make her any better, or make her worse than the monsters Hellsing hunts?