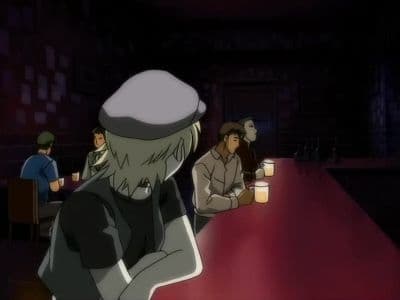 Innocent as a Human

The Hellsing Organization sets out to investigate a series of ""snuff films"" floating about the Internet, after footage of one of their own being killed begins to make the rounds. Meanwhile, Seras deploys with her unit, now under the command of a former SAS officer who seem to have a particularly distasteful attitude towards her, to silence an apartment building crawling with ghouls. As the raid unfolds, the secrecy surrounding the very existence of the Hellsing Organization is thrown in jeopardy when a mole broadcasts footage of the assault on live television. Seeking answers, Seras sets out on her own to investigate the scene of the previous night's raid for clues about what transpired. During her investigation, she manages to uncover clues about the origin of the snuff films and goes to put a stop to it. Seras isn't the only one on the trail, as Arucard and the Hellsing Organization are also on the scene to attend to the vicious vampire behind the camera, and the TV investigative rep