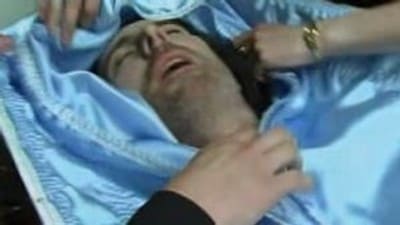 The balifs and Mr Wilson are still after Frank. And Frank seems to be more interested in spending time with his ex-wife, Monica, than dealing with his spiraling debts. However, much to Frank's annoyance Norma, Monica's lesbian partner, gives Frank a good idea, to fake his own death! Meanwhile Maggie realises that Frank isn't as interested in her as she hoped. When Anthony comes around to talk about Fiona she accidentally gets Chilli in her eyes and staggers out into the Garden! The first time she has been out in five years! Tony has finally found the perfect way to get rid of Steve and get with Fiona for he has stumbled across Steve's car stealing scam. The balifs aren't so convinced that Frank is dead until one of them attacks Frank in his coffin, in front of the family! When Frank doesn't stir the balif finally realises that Frank is really dead, and how sick his violent outburst/attack seemed. At Frank's wake Frank bursts out of the coffin and a party starts. Maggie turns up to ever