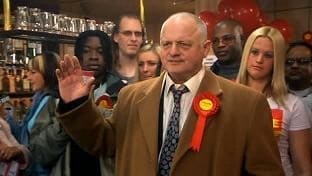 The local elections are underway and Kash is running to be Chatsworth's councillor against dirty-dealing Bernie Creme. However, it turns out that Bernie is just a racist who exposes himself to the entire pub and loses all his supporters. Lillian's husband is involved in a tragic accident which, at first, appears to be caused by Tony and Stan's Police van. But it later turns out that moments before he was hit by the van he was shot in the head. And it seems he was a junkie, according to the Police. Lillian is dashed off down the Police station to be interviewed about her late husband while Carol realises who shot him-Carl! Tony and Stan quickly figure out it was Carl as well due to CCTV footage. The family (bar Fiona who doesn't know) rallies behind Carl and just about manage to get him off the hook. Frank meanwhile decides to take the deadman's indentiy to get his benifits and then tries to kill his pet dog through various methods.