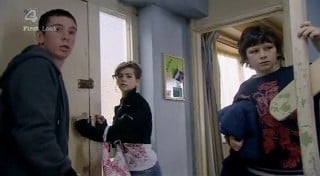 When Manchester experiences an earth tremor, Monica's waters break and she goes into labour. On the other side of Chatsworth, the same tremor knocks Frank off of his barstool and puts him in a coma. Monica's refusing to have the baby unless Frank is present, but how long can she keep her bun in the oven? While he's out cold in his hospital bed, Frank experiences an alternative world: a life where he is a success, where Ian isn't gay and Debbie looks like she'll never leave home. It's the world as Frank would have it; or is it? Carl is finding new success with girls by posing as a single parent. It's all going very well until his latest target runs off with the baby. Meanwhile, Shane has a proposal to put to Kelly.