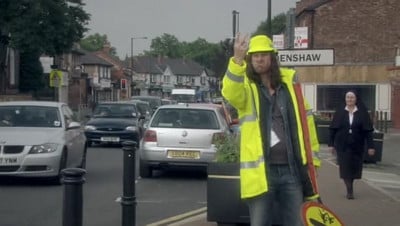 It's Frank's 50th and Liam has the dubious honour of sharing the auspicious day with him on his 11th birthday. Uncharacteristically, Frank snubs the chance of a party, and instead opts to dwell in his own lonely loveless existence until... Libby, a local librarian falls into his life. His passion reignited, a whirlwind romance ensues - but will Libby's mother Patty (a full-time wheelchair user), bibliophile activists and riot police stand in the way of Frank holding onto his new love? Meanwhile, Liam's inherited the dirty nappies, rubber gloves and responsibility of the Gallagher household. Nin, Liam's great grandmother, offers to move in and help ease his burden, but a selfish Frank rejects her. Liam is infuriated. Unable to cope herself, Nin is spurred into homicidal action and in turn teaches Liam a priceless lesson in surviving as a Gallagher. Elsewhere, whilst an overdue Karen worries about the paternity of her unborn baby, an oblivious Jamie and the rest of the Maguire clan prepare for the imminent arrival. Joe lurks in the background, but a medical emergency soon brings him to the fore and back in favour with the Maguires.