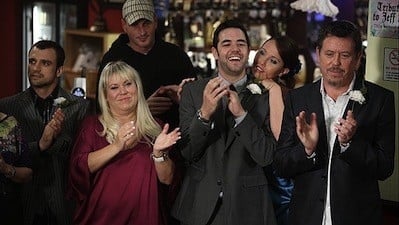 Wedding bells are in the air on the estate, a little too frequently for the police, as the Maguire's exploit a new money-making scheme. Business turns to pleasure when Shane asks Kelly to marry him, but his dream soon becomes a nightmare when she turns him down. As his life unravels Shane uncovers a terrible betrayal by those closest to him and must suffer for the sins of his father. Hitting rock bottom he finds the strength to make an important decision. Now Libby and her mother are firmly nestled in the Gallagher house, Frank 'volunteers' to paint Patty's converted bedroom. But in the pursuit of a bargain, Frank falls and feigns injury leading to a potentially disastrous face-off with Patty. Elsewhere, Chesney holds a house party to get close to Sammy, but a promise turns to a threat when blood is spilt, leaving awful consequences.