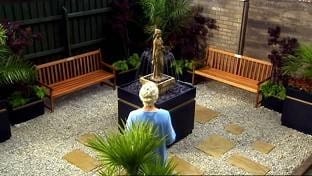 A gardening competition is launched, by the council, to find the best garden and reward the winners with a years free rent! Naturally the shabby gardens of the Chattersworth estate suddenly turn into gardens fit for the queen. Carol doesn't wish to loose the winning prize and turns the Gallagher's garden from old wreck to sparkling garden. Veronica wants to do up their garden but Kev isn't too keen, that is until he meets with Tommy who works for the council. Together they steal a Diana Memorial Garden (!) and move it into their back yard. Carol see's it as a declaration of war between mother and daughter and when the garden is trashed things turn even nastier between the warring family. It's later revealed that a group of yobs were responsible for trashing the garden, and others, but this does little to end the argument. Meanwhile Shelia leaves to visit her sick mother in a hospice and leaves Frank with baby Nigel and Delia.