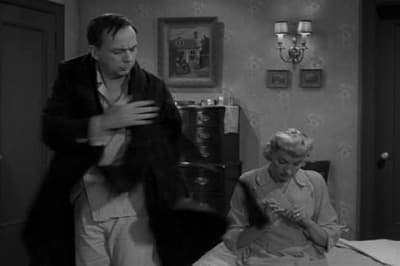 Harry Parker and his wife Norma live in apartment 4-D. Their next door neighbor is an actress named Lainie. One day, she knocks on the Parker's door and asks for help. Lainie needs someone to get rid of the body of Bill Nelson. He was shot through a window in her apartment and now lays their dead. Lainie wants Harry to move the body downstairs to the basement. She fears bad publicity. When Harry wakes up the next day, the thinks it was all a bad dream. When he goes to the basement he finds the police. Later, Harry's wife admits to having an affair with Bill. When the police learn of this, Harry becomes the chief suspect in Bill's murder.