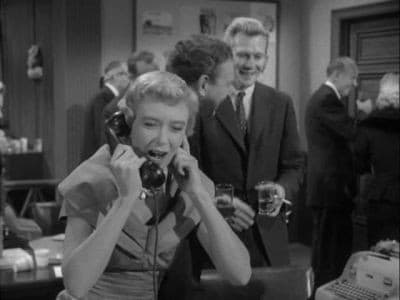 At an officer Christmas part Shelley calls Tony and tells him he must get a divorce and marry her. She threatens to tell his wife about her if he doesn't. After the party, Tony comes to Shelley's office. When she threatens him again, he stabs her. He tries to leave the office but discovers that the door is locked. He finds the keys but uses the wrong one and jams the door. He tries other ways, but they all fail. Eventually he hears some carolers outside on the streets below. He writes a note and using the keys to weigh it down, he drops it out a window. The keys prove too heavy and the note sinks into the snow.