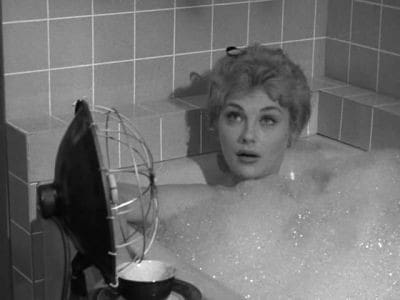 Steve and Judy Archer are having money problems. When Judy's first husband Harry died of a heart attack, Judy collected on a large insurance police Steve sold him. Judy and Steve were then married and Steve quit his job, but later squandered most of Judy's money. The couple discovers that Harry bought a winning Sweepstakes ticket. Unfortunately, the winning ticket is in his pocket and he is buried six feet under. Judy wants to dig up the corpse, but Steve doesn't. Judy gets help from a reporter who digs up the body and finds the ticket. Later the reporter reveals himself as an insurance detective. He believes Harry was murdered, possibly by Steve. Later while Judy is in the bath, Steve returns and takes the winning ticket. He throws an electric heater in the bathtub. Judy screams and Steve runs, right into the arms of the waiting police. Judy emerges from the bathroom unharmed. The detective removed the fuse so she was not electrocuted. As Steve is led away by the police, Judy takes th