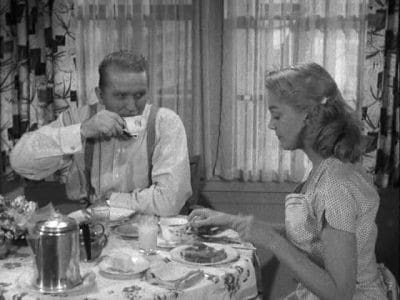 Fran is a housewife addicted to gambling. Her bookie threatens to tell her husband if she doesn't pay up a loan by five that afternoon. She needs to raise 25 dollars fast. She manages to scrape up five dollars and then tries to shoplift the rest. She is caught by a store detective. As they drive off in his car the detective listens to her story and offers her twenty dollars in exchange for a little romance. She refuses and the car crashes. She flees the scene of the accidnet but accidently leaves her purse and the money. She returns home and is surprised to have her purse returned by the police. It now contains twenty dollars which they found in the car and assumed was hers. She now has enough money to pay off the loan. After her husband calls to say that he must go to Chicago on business, Fran calls her bookie. Instead of paying him the money she tells him to put twenty-five dollars on a horse named Chicago Flyer.