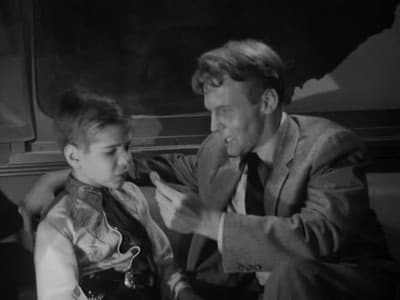 Mr. and Mrs. Templeton are on a train with their deliquent eight-year-old son named Johnny. Outside it is snowing. A blizzard is raging. An announcement reveals that someone has escaped from a nearby asylum. He is not dangerous, but is in need of help because he is caught in the blizzard. Johnny annoys some passengers on the train. His parents get angry with him and tell him to be quiet. The train breaks down and Johnny notices a man outside scratching at the window. Listening to his parents, he doesn't say a word and leaves the mental patient outside to die in the blizzard.