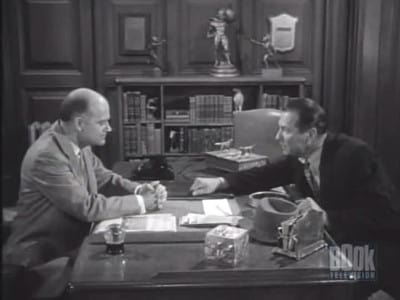 A man named Henry Lowden calls William Spengler and asks for information for a book. Spengler is a president of a bank and Lowden wants information on an unsolved crime. Lowden is interested in a man named Mathias who was shot after attempting an escape from prison. Spengler tells Lowden that Mathias stole a half million dollars from the bank which has not been recovered. Later, Lowden's investigation reveals that Spengler was in fact the robber. Spengler offers to cut him in. Lowden refuses and calls the police. He was not a writer; rather, he was the prison guard who shot Mathias, an innocent man framed by Spengler.