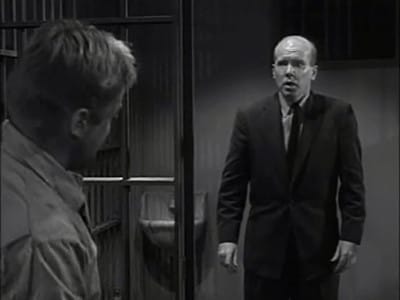 Incident in a Small Jail

A traveling salesman Leon Gorwald arrives in a small town and is promptly arrest for jaywalking and placed into jail. The sheriff arrives with the suspected murderer of a young girl. He tosses the suspected murderer into the cell next to Leon. The mood of the towns people begins to grow ugly and a lynch mob assembles. The sheriff decides to move the alleged killer for his safety, but is knock unconscious. The suspect switches clothes with Gorwald and forces him into a cell. The mob rushes the jail but Gorwald is saved in the nick of time. The charges against him are dropped and he leaves town. He later stops for a pretty hitchhiker who accepts his offer of a ride without knowing that he is the actual killer.