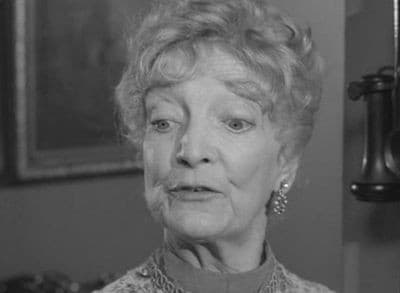 There Was an Old Woman

Monica Laughton is an eccentric old woman who has the strange habit of hanging a funeral wreath on her door when she wants to announce the passing of one of the members of her imaginary family. Frank and Lorna Bramwell decide to rob Monica. They believe she has money stashed away in the house. They pose as distant relatives. Monica gives them a tour of the house and introduces them to her imaginary family. Frank and Lorna search the house, but don't find anything. Frank threatens Monica, but she ignores him and begins to feed her imaginary cat. The next morning Frank and Lorna eat several cupcakes for breakfast. Monica says that she cooked the cupcakes for mice. Frank and Lorna fall over dead because the cupcakes were laced with arsenic. Monica hangs two wreaths on her door and everyone assumes she is just imagining again.