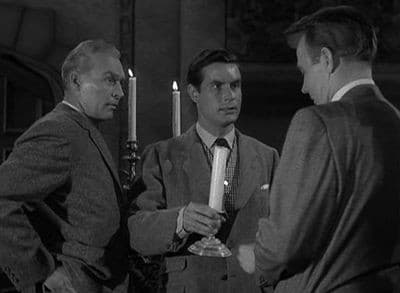 The Gentleman from America

Howard Latimer makes a bet with two Englishmen that he'll be able to stay alone at night at the Hurstwood Manor, a terrifying haunted house. Latimer is given a candle, a match, a loaded gun, and a book that explains the ghostly history of the manor. An escaped lunatic once broke into the house, beheaded a young girl named Julia, and caused her sister to go insane. While in the house, Latimer sees the ghost and fires upon it without results. Several years later, the two Englishman meet up with Latimer and explain that it was all a hoax. Latimer suddenly tries to strangle one of them. An attendant from the local asylum from which he escape, restrains Latimer. Apparanly Latimer has gone insane. In his insanity, he only wants one thing: to get to his sister Julia.