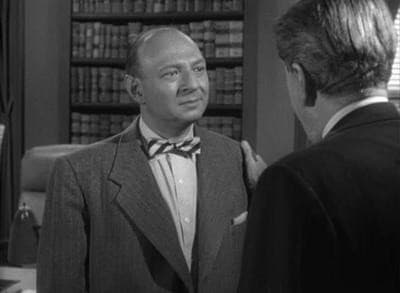 The Orderly World of Mr. Appleby

Laurence Appleby is an antique dealer that owes his business associates thousands of dollars. His wife refuses to let him borrow on her insurance policy. He decides to killer her. He consults a book on accidental deaths and finds a perfect method: he kills her by pulling a rug out from under her. Laurence then marries a wealthy widow who agrees to pay his debts. When he spends most of his time in his shop, his new wife becomes angry. Laurence's debts begin to grow and his new wife refuses to pay them. He then plots to pull a rug out from under her. Unfortunately the new Mrs. Appleby has read the same book and has given a letter to her lawyer about her husband's method of murder. She instructs the lawyer to tell the police if anything were to happen to her. The lawyer reads the letter and calls Mrs. Appleby to check if she is all right. As Mrs. Appleby moves to the phone, she accidentally trips on a disheveled rug and falls to her death.