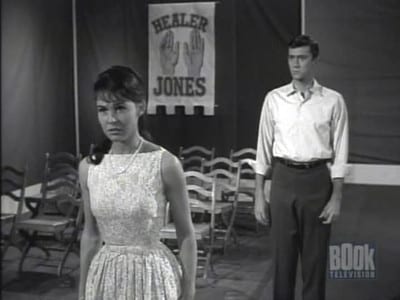 The Faith of Aaron Menefee

Reverend Otis Jones is a faith healer who stops at a service station to get his car repaired. The station's owner Aaron Menefee is an honest man who impresses the reverend so much that he agrees to cure his ulcer. Aaron becomes attracted to Rev. Jones's daughter Emily. He quicks his job and joins the reverend's revivial show. Aaron wants to marry Emily, but the reverend does not give his permission. The reverend does not believe Aaron's faith in him is strong enough for him to marry his daughter. Later the revival returns to Aaron's town. Aaron discovers that the town doctor is being held by two hoodlums, one of whom is injured. Aaron believes that this is a test of faith. He calls for Reverend Jones to cure the injured man. The hoodlums warn that Jones will be killed if his faith healing does not work. The end result in never shown, but Aaron wins either way. Either the faith healing works and Aaron's faith is demonstrated, or the faith healing fails and Jones is killed. In either cas